If I Stay by Gayle Forman

Rating: 3.5 / 5 stars
Describe it in three words: Quick – Sad – Unique
First impression: Trying to read this before the movie comes out
Last impression: Wow that was misleading. All of the author notes, discussion questions, etc. took up another 30 pages at the back of the book so I kept thinking I still had a lot more to go 😦
Format: Paperback, borrowed from my coworker 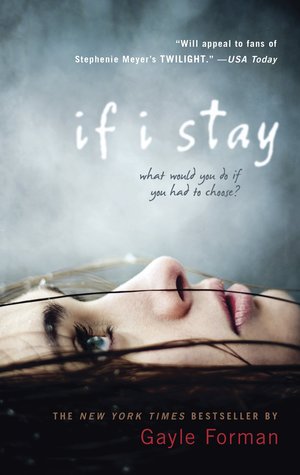 On a day that started like any other,
Mia had everything: a loving family, a gorgeous, admiring boyfriend, and a bright future full of music and full of choices. In an instant, almost all of that is taken from her. Caught between life and death, between a happy past and an unknowable future, Mia spends one critical day contemplating the only decision she has left. It is the most important decision she’ll ever make.
Simultaneously tragic and hopeful, this is a romantic, riveting, and ultimately uplifting story about memory, music, living, dying, loving.

Review: My expectations were too high with this novel. Everyone constantly raves about it and I’ve seen countless 5 star reviews. I’m not sure why, but it just didn’t hit that level for me. Don’t get me wrong, I really liked this book. I can see why it’s so popular and I’m really glad I read it, but I was expecting to be blown away. This tweet kind of sums up my reaction:

I gave 'If I Stay' 3 stars immediately, got off the couch, thought about it and let it really sink in, then bumped it up to 4 stars lol

When I finished the book, I was really surprised. I was like “that was it?” — but that was mostly because there were a million fuckin pages at the end of the book for discussion questions and author questions and other shit. I was totally caught off guard; I thought I had a good 30 pages left to read. In other words, I wasn’t mentally prepared for the book to end. It sounds stupid, but it completely threw me off and made me think “wow I don’t know if I liked this book that much.” After getting off the couch for a few minutes and coming back, I started to let the book sink in (like an ending normally would have). I’m pleased with the way it ended, after a lot of thought. This is definitely the kind of book that resonates with you and you need to think about it to fully understand. (I felt that way about the Gone Girl ending, too).. I really did love a lot of the aspects of this book. First, the characters. How could you not love every single one of them? Her parents were funny and amazing, her boyfriend was adorable and romantic – the list goes on. Even though half of them were dead by the first few pages, Forman really let the readers get to know them. The flashbacks were perfectly executed and fit in with the storyline as it was developing. I really liked that she already had an established boyfriend, so it isn’t like other YA books where the character is growing into a relationship with a love interest as the story progresses. (Granted, that would have been difficult to even do with a book like this.) Adam was a great boyfriend, which was really refreshing; they had their problems, but it really seemed like they could get through them. Her best friend, Kim, was awesome too. I can’t get over how well Forman developed this characters without the reader really even interacting with them. Their stories were told through flashbacks and through Mia observing them in her in-between state. I think this novel was beautifully written and gripping. It wasn’t a fast-paced read because it was action-packed; the plot was actually fairly slow I’d say. It was a book you could read quickly, because that’s how she wrote it, but still take your time to appreciate her style. So what really didn’t do it for me? For one, she spent most of the book fairly calm about the fact that her entire immediately family was dead. I realize that she really had no clue if she was alive or dead, so she didn’t know if she should be upset or not, but still – if I saw my parents in that condition I would be a fucking mess regardless of if I survived. Of course, this book begs the question: would you stay or would you go? I can’t really say. I guess for me it would be a little different. Since my parents are divorced, it would have to be an incredibly freak occurrence for my mom, dad, stepmom, stepdad, stepsister, and half sister to all be in the same accident (or even the same place at once). If this happened to one side of my family, at least I would have the other side. And my boyfriend. And my friends. I think I would probably have to stay. Anyways, overall – I enjoyed it. The writing was beautiful. The characters were amazing. The ending was appropriate. I just didn’t feel like it was lifechanging enough to give it 5 stars. I really wish the hype monster hadn’t gotten to me, because I built this novel up way too much.

I would recommend this book for anyone who wants to read the book before seeing the movie! I finished this one in less than 24 hours, so it’s a quick but powerful read.